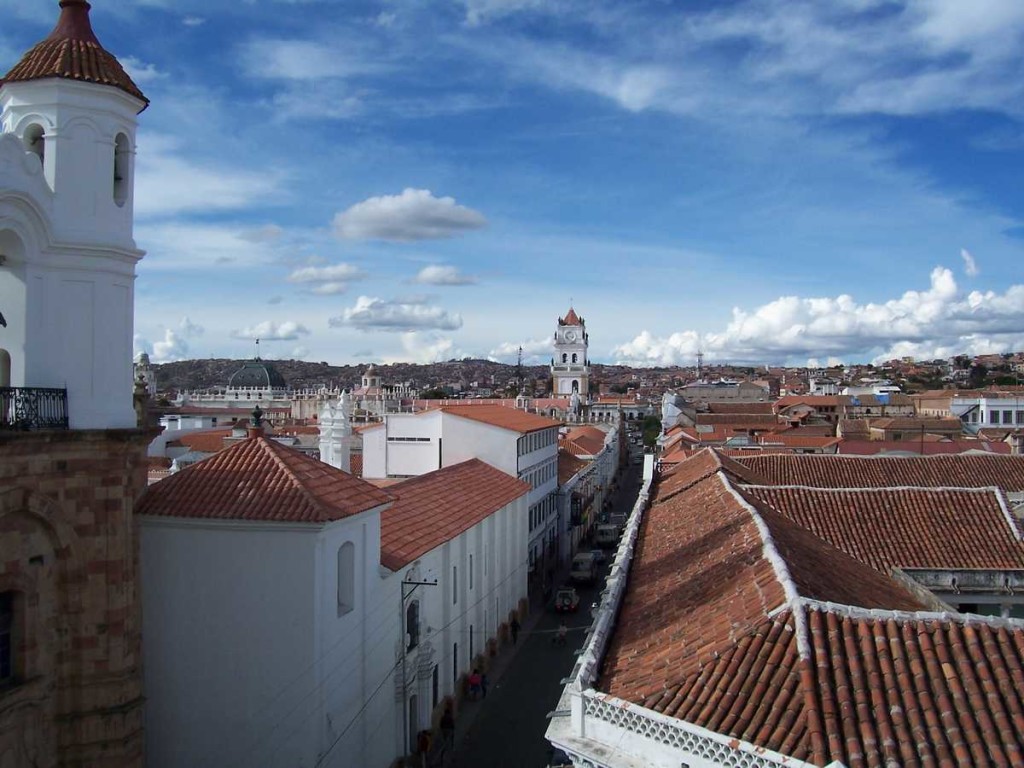 Colonial Sucre and their surrounding /What can Sucre offer you ?

Sucre, capital of Bolivia, is a city that is 2860 mt above sea level .Has a temperate climate the whole year. In general, the sky is almost always very blue and in winter you  can enjoy a radiant sun.

It conserves good part of their colonial and republican buildings that are part of the history of the country; as the House of the Freedom.The Metropolitan Cathedral, the University San Francisco Xavier, the Supreme Court of Bolivia and National Library.

In Sucre different indigenous ethnic groups that are part of the cultural diversity of the region converge. In the streets, fairs and rural towns of their environment, they can be noticed complex and colourings fabrics, language, music, religious beliefs, myths, expressions of a culture that stays almost intact.

Sucre has also been the centre of the Hispanic culture, headquarters of the Real Audience of Charcas that embraced the whole country, the Argentinean North and Paraguay.

From the city, you can consent to natural and ecological places of great value: a few minutes one of the parks of the period meets bigger create of the world with dinosaur tracks of impressive size and fidelity.

Sucre, white city of America, city of towers and colonial steeples that rise from their beautiful churches, been founded in 1540, it has been declared by the UNESCO: World Cultural Heritage Site to be the alive museum of what was the tremendous life of the Spanish colonial aristocracy .

It visits to the House of the Freedom, considered as the most important national historical monument in the country, in their main living room it was founded the records of the Independence of Bolivia August 6 1825. It exposes important historical objects and historical documents, first money , first flag and  sign from Simon Bolivar, Casa libertad is situated on the  main square.

The visit begins, in the denominated area Munaypata (Hill of the Love), Understands the Square Anzures, place where you founds the city, mirador of the Recoleta of Colonial style where the visitor will be able to appreciate the 7 paws of Sucre. Convent and Museum of the Recoleta, the corridors toward their restored Chapel take us to beautiful choir from whose artistically figured seats in thick wood their songs like the cloistered monks of the time rise, important tourist patrimony that conserves in their interior the famous millennial cedar, the seat of the choir of Baroque style and an important collection of works of art.

In the Craft we find important development centre to textile art of the before Columbus time as it is that of ASUR (Anthropologists of the Andean South) that is in the big house of the Chaplaincy, in which collections of fabrics of the region are presented with recovered symbolic expressions and reproduced in the one modernized by the own residents of the regions ofJalckas and Tarabuco.The Museum Indigenous Téxtil (ASUR) it contemplates a series of textile: Ajsus, Chumpis, Ponchos and typical accessories besides information, it shows of two cultures: Tarabuco and Jal’qa:

Journey that understands the most important places in those that events related with the process of the independence like the House of the Freedom were developed, in this historical enclosure ,the signature of the declaration of the independence of Bolivia in 1825. The interior includes furniture and decorations. In their museum all the documents are conserved that attest the historical events of the independence, building of the tricentariaSan Francisco Xavier, Churches:The metropolitan Cathedral. In their museum we find rich religious devices and clerical gear of the time, as well as figured wooden tables with inlays of fine shell and pearl, silent testimony of the wealth of the colonial church, the plaza and Arcade of San Francisco, the most important are the museums of the University of San FranciscoXavier with exhibitions of fabrics, archaeological devices, colonial painting and furniture of the time. In cathedral San Philip you can visit the tombs and you have a suburb view from the roof

Sucre and their surroundings

The General Cemetery of Sucre where important characters of the history of the country lie .This with beautiful gardens, it has artistic stone mausoleums, marble with columns.Visited by national tourists and foreigners. Later on you can move toward the castle of the princes of the Glorietta, Francisco Argandoña and Clotilde Urioste of Argandoña, the Castle dates of ends of the XIX century and principles of the XX century. It is 7 kilometres from Sucre on the highway to Potosí .

The textile Tarabuco, gets the attention in the designs Tarabuco, it is their clear segmentation in bands, defined among them by diverse types of elements, an effect of fundamentally provoked order for the symmetry and lastly the impression of a clear space. Their images remind us somehow to the paintings of the Egyptians that they related the life of their faro’s . The design tarabuco opens up to a solar space of organized nature, inhabited by animals and well-known people full with activities and cultural objects. The abstract figures or iconic as are knitted in collared sheep , in alive colours. what allows them to contrast clearly .On the bottom they always knit in white cotton. This way not only the colour but also the texture, the figures appear in relief, they make stand out each detail, allowing that the look captures them with easiness.

Besides working the contrast, the designs Tarabuco also plays with the degradations of the colou. The effect of strange rays of light, that you come to accentuate the brightness that already had the colour, take place this way. The textile of the region of Tarabuco combine abstract elements with a figurative language that expresses the Kay Pacha” (this world of here), the social one and the landscape that the man dominates. Those figures are clearly recognizable as the farmers, the preparation of the Pucara, elaboration of the Chicha, the siembra, etc.

Departure hrs. 8:30 toward the town of Tarabuco located 65 km. to the Southwest of  Sucre, 60 km.  On a asphalted highway. The altitude is 3292 mt and  it has a variable temperature from 10° to 25° C. Tarabuco is a place denominated by Crafts.

Place where got rid the Battle of ” Jumbate ” March 12 1826 when the realists were defeated by the natives in the  16 year-old war.

Tarabuco, where the population belongs approximately to 12.000 people .Their conditions of life are similar to those of the Jalq’a. As they live in autonomous communities without common political structures.The cohesion that is perceived along this territory is based on the general characteristics .Tarabuco was founded by the Spaniards in the second half of the XVI century it is characterized by the presence of several native regional communities that maintain its customs and traditions, You will be able to appreciate the Sunday fair and the Pujllay , to which members of the communities attend wearing their typical clothes, to carry out exchanges of agricultural products and  to sell their crafts ,textile and you will be able to observe or buy memories and share this native feeling . You will also be able to appreciate the market  from 10:00 AM in the morning to 2:00of the afternoon .There is a small demonstration of the Pujllay dance , in the House of Tourism.

The Pujllay or Game begins with a Catholic mass in Quechua language it stops then to continue with the party and the rejoicing for the victory of the Battle of ” Jumbata ” in a parade of nonpareil colouring, the peasants move to the place where the Pucara is and they dance in circles to its surroundings to the they are of the Tokoros, Pinquillos, Spurs, Bells and Drummers.

The Dinosaurs Tracks are located to 5 km. of the city of Sucre, where you can appreciate great variety and quantity of prints left by prehistoric animals,different species around 5000 impressions of footprints of dinosaurs, 150 different footfalls. This spectacular attractiveness was investigated and given to the public opinion in October of 1994 . The scientific mission that he/she investigated during 6 weeks

Cal Orcko is attractive for several reasons. To begin, the magnitude of the wall is impressive: more than 25.000 square meters, full with impressions of prints. The Dinosaurs tracks and the remains of the turtles, crocodiles, fish and algae are of the period superior cretaceous it is for the specialists something very interesting, up to now remains of that time didn’t exist. In this place we have all the diversity of the dinosaurs. Lime Orcko is a place of pale ontological superlatives; here the walk of more 350 meters long is from a saurian de predator, considered as the biggest sample in the prints of the biggest dinosaurs in the world.