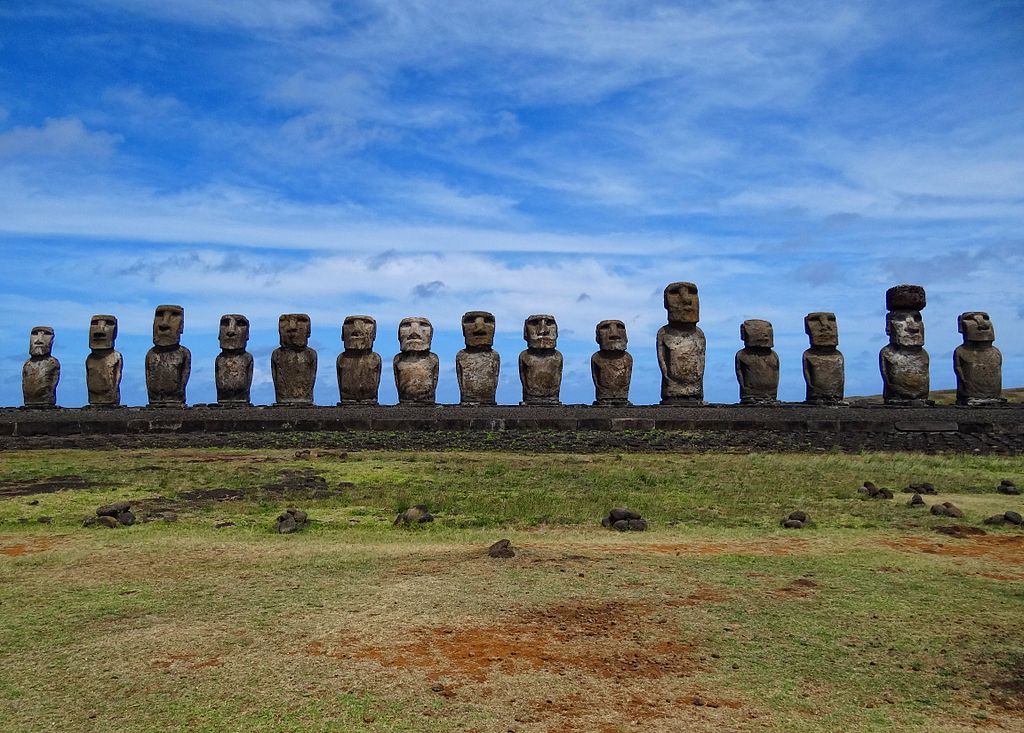 Easter Island is one of the world’s most isolated inhabited islands in the southeastern Pacific Ocean.

Easter Island is famous for its 887 extant monumental statues, called moai , created by the early Rapa Nui People. In 1995, Unesco named  Easter Island a world Heritage site, with much of the island protected within Rapa nui National Park.
The name “Easter Island” was given by the island’s first recorded European visitor, the Dutch explorer Jacob Roggeveen, who encountered it on Easter Sunday.

The large stone statues, or Maoi, for which Easter Island is famous, were carved in the period 1100–1680 Ce. A total of 887 monolithic stone statues have been inventoried on the island and in museum collections so far.Often identified as “Easter Island heads Day 1 flight from Santiago   Easter Island (-)
Reception at Mataveri Airport and transfer to the Hotel. Overnight. Day 2 Easter Island (B/L)
Breakfast at the Hotel.
Tongariki, Rano Raraku & Anakena:
Visit the ruins of the temple of Akahanga, where the hats of the moai are the outstanding feature; they lie where they fell when the platform was destroyed. Continue to the volcano of Rano Raraku, where all the moais on the island were carved out of the rock. Climb to the edge of the crater of the volcano to appreciate the small lake inside and moais scattered about the inner slopes in various stages of construction. Continue to Ahu Tongariki, where many of the huge moais were toppled by a large “seaquake” in 1960. Lunch in a restaurant at a Rapanui’s house. Tour ends at Anakena beach with its two beautiful Ahu, inclu

Day 3 Easter Island (B)
Breakfast at the Hotel.
Am: Exc. Rano Kau, Orongo & Vinapu:
The tour begins visiting Vinapu where there are archaeological remains related to work and construction of figures with volcanic rock, several destroyed during internal wars between the tribes. Then, continue to Rano Kau, which was the second of the three main volcanoes to erupt about 2.5 million years ago. It has a height of 310m and a huge crater of 1.6km in diameter and a fresh water lagoon 11m deep. Next to the volcano is the ancient ceremonial city of Orongo, where the greatest concentration of petroglyphs exists. There are pictures of the Tangata Manu birdman.
Pm: Ahu Akivi & Puna Pau:
Ahu Akivi is the archaeological center of the Roihi sector and was the first site to be properly restored in the 1960’s. It is a ceremonial site, which is particularly interesting not only because of its location (in the center of the island) but also because of the legends which surround the Seven Moai which are situated on the platform or Ahu. The tour also visits Puna Pau, to the east of the town of Hanga Roa, which is situated in a small crater of red stone. This is where the “pukao” or hats (topknots) which crowned the moais were made. On the way, it is possible to see the path where they were transported, including some examples of the Pukao which have fallen by the wayside. Return to the Hotel and overnight. Day 4 Easter Island (B)
Breakfast at the Hotel. At the agreed time, transfer to Mataveri Airport to take your onward flight

PRIVAT: Transfers and excursions are in private service with English-speaking guide assistance

SEAT IN: Transfers and excursions are by coach (SIB) with English-speaking guide assistance

Does not include:
– Lodging.
– Entrance fees to national parks (quoted separately) 90 USD P/P
– Meals not indicated in the program, drinks or any extras
– Tips to porters at airport and hotel
– Flights
– Airport taxes

Important:
– Itinerary could be changed according to flight schedules, climate conditions, or in order to provide a better service.
– Easter Island is composed by archaeological and cultural sites, which are under conservation protection. Access is forbidden to restricted areas.