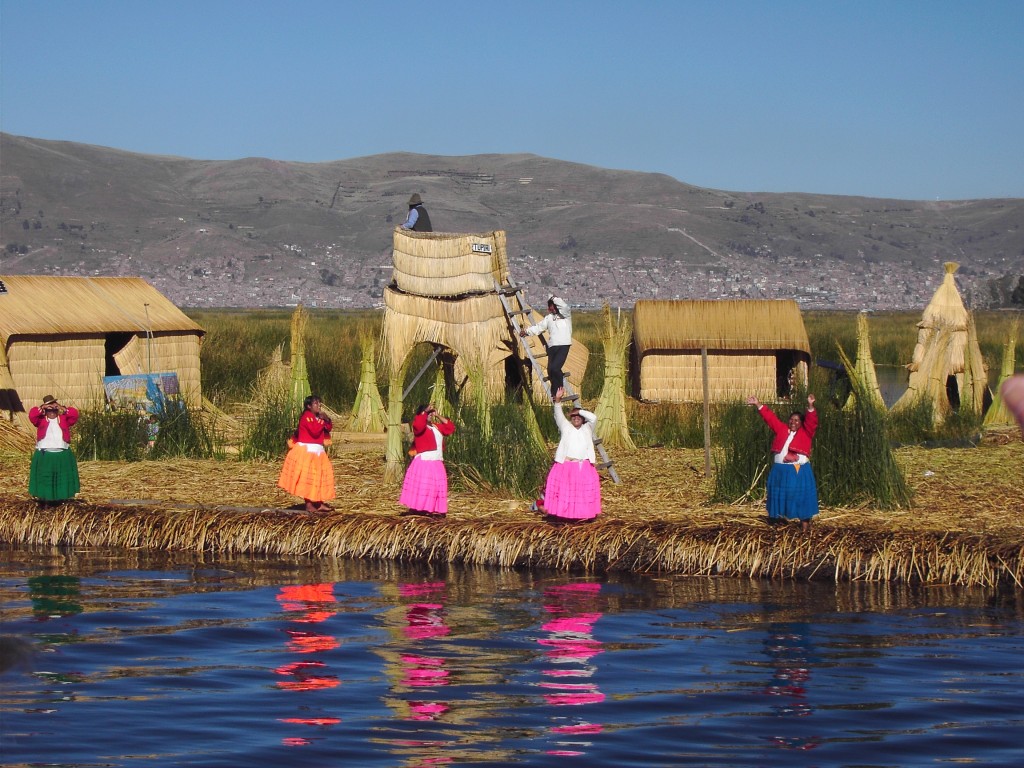 Titicaca lake and his islands

Location: It’s located at the high plateau of Collao in the Southern highlands of Peru, at the border with Bolivia. It’s at 3,825 meters or 12,560 ft. above sea level, therefore, take it easy on the first days, otherwise, you could get sick because the altitude. Landscape: The lake Titicaca is the highest navigable lake in the world and the largest one in South America. Its surface area is 8,300 km square, with a length of 195 km and an average width of 50 km. It’s also very deep with a maximum depth of 285 meters (940 ft.). The temperature of its water remains between 10°C (50°F) and 12°C (54°F), that’s why it’s possible to swim.The fish here, are trout, king-fish and other native fish in the lake. It is possible to see also many birds as ducks, gooses, flamingo’s, Andean ibis, and even seagulls. There are also many kinds of llamas in the surroundings of the lake. The city of Puno

Puno is a touristy place thanks to the nearby Titicaca Lake and Sullistani. The city itself isn’t very interesting and looks poor. Most of the buildings are made of adobe and covered with metal roofs. The centre is small. The Jirón Lima is a car free street with restaurants and pubs. This street is the centre of nightlife and many tourists. Peñas with life music create a pleasant atmosphere. One end of this street is the Plaza de Armas with the Cathedral built in 1747 by Simón de Asta. In the Avenida la Torre is the railway station situated and a market of vegetables and fruits. In the small tiny streets of Puno are a lot of bicycles, used for transportation. As these are also used as taxi, they bring visitors to the harbor at the end of Avenida el Puerto and Avenida Titicaca. Boat trips are offered with a guide to the floating islands of the Uros and to the islands of Taquile and Amantaní. Puno is the city of folklore, music and dance. In no other place as Peru are so many different dances. In “la Fiesta de la Virgin de Candelaria” in the first week of February ,70 local groups show their dances. Lodging: 1* to 4**** hotels in the city of Puno The Spaniards founded the city of Puno in 1668. It is a city rich in local mestizo art, the fusion of native and Spanish styles in its colonial balconies, weavings and pottery. Legend has it that the waters of Lake Titicaca are the birthplace of Manco Cápac and Mama Ocllo, the mythical founders of the Inca Empire. They rose out of the water with the divine assignment to establish an empire and unite the different cultures in the name of peace and civilization. The area also gave rise to one of the greatest pre-Inca civilizations, that of Tiahuanaco, the maximum expression of the ancient Aymara people. The impressive grave towers of the Kolla-culture in Sillustani are the concrete remains of the pre-ceramic period nomads. The Incas incorporated the region of Titicaca and the Kolla-culture under Inca Mayta Capac to the empire of Tawantinsuyu and became part of the region of Kollasuyu. The importance of this Suyu into the empire was especially the presence of gold and silver mines, the breeding of alpacas and lamas for wool and meat and the culture of altitude plants as potatoes, quinoa and coffee. The lake is also dotted with dozens of islands, each of them with their own characteristics. The floating islands of the Uros, and Taquile /Amantani islands, still use traditional weaving techniques.

Its an unforgettable experience. On these islands, which are reached by comfortable motor launch, journeying 3 to 5 hours, according to destination, it is striking how the local people use, as in other parts of the country, terrace systems to gain cultivable land on the steep slopes. Uros ,Taquile, Amantaní on the Peruvian side of the lake, are the most beautiful spots, these are part of the tourist circuits.

The floating islands of the Uros

When the Incas extended their imperia, especially under the great Inca Pachacuti, the Indians living on the shores of the lake Titicaca withdraw on the Titicaca lake. The main vegetation is the Totora reed. With this they build their floating islands. The Incas left them alone and centuries later until now they still live on their islands. They live from fishing and recently from the sale of souvenirs to tourists. The totora reed is the most important material they have. The islands are in fact not really floating, but in rainy season when the water level rises of the un deep Titicaca, some islands start to float. The reed at the bottom rotten so every time they have to pull up their islands. Their houses, boats, tools, fishing nets and souvenirs are also made of the same reed. Totora is even part of the menu; the taste is a little bit sour and sweet. Boat trips can be made on their typical totora boats. The guide might invite to taste the reed (only the white, soft roots are eatable)

The Taquile and Amantani islands

Taquile and Amantaní are notable examples of societal and comunitario life, showing values of reciprocity and complementary in their social output of textile handcrafts and of their stone carving, now lost in other parts of Peru which are not strictly Andean.
This is an indigenous community of some 350 families which continues to live within the traditions of the 14th century, according to the principles of Inca life. Here, without noting the passing of time, the three golden rules of the Empire of the Sun have been kept: Ama suwa, Ama quella, Ama llulla (do not steal, don’t be idle, and do not lie). The contact with other civilizations has not been able to destroy the profound identity of the Inca way. Enriched by a turbulent past, this small island sinks its roots into origins of Inca civilization. And although the Spanish colonization did impose the heavy burden of serfdom, this did not manage to destroy indigenous values and customs. For if there exists a fundamental characteristic in Taquile, it is without doubt the joy of living, good humour, the smiling face, and mutual support.

On the way out of Puno, in the bright clarity of the morning, the traveler board’s one of the boats that daily connect the small provincial city to the island. Rocked by the soft movement of the waves, the stands of totora reed open before the launch. After some three hours of boating, under a luminous sky, the boat puts in at one of the island’s small ports. On Taquile there are no planes, no trucks, no cars, no motorcycles. It is on foot, following the little pathways of ordered stones, that the visitor allows himself to be infused with this surprising atmosphere that envelops the island. The principal characteristic of the island resides in the fact that it has conserved, across the centuries, a great many of the customs of the old lake population, such as a comunitario life where everything is shared, exceptional handcrafts, and – unique of their kind – dances and traditional music, maintained in all their purity..

Nature has been equally generous to the island. The native vegetation has been enriched with eucalyptus and cypresses brought from outside in the nineteen-fifties. These species adapted to the climatic conditions of the region. In the waters that surround Taquile grow beds of totora reed and on the slopes the grass known as ichu, which is used both to feed the sheep and to roof the houses. Taquile  is unique for many reasons, but the main one is its inhabitants. They have kept their ancient customs wearing typical clothes and living like they did a century ago. They wear distinctive clothes: for men, black pants, white shirt, black vest and a colorful hat called “chullo”; for women, traditional skirts and long black tunics called “llicllas”.
Advice: On Amantani island you can stay overnight in a local family. Here you stay ,each 2 persons in a family , you sleep basic but clean and learn to understand the local customs  It’s a good idea to bring gifts for the family who will host you in the island. The best are fruits, notebooks, crayons, color-pencils for the kids. It would be also nice if you bring with you postcards, caps or t-shirts of your city or country, that way you could explain them about your country. The local family feed you and in the evening you will go to the local party, also you have to wear their poncho! Flights : to Julianca from Lima, Cusco, Arequipa, from Juliaca it’s a 45 min ride to Puno

Bus or microbus along the lake shore to Juli, Pomata, Yunguyo and to the Bolivian border.

Morning boats to the Taquile and Amantani islands (4 hours) and to the Uros island. A half-day excursion,1 day or 2 days excursion with sleeping in a local family on Amantani island.

Bank: Banco de credito, calle Lima, in the pedestrian street are many banks and money change offices
Internet: at many places in calle Lima
Post: jr moquegua 267
Laundry: in the hotel or somewhere in the centre, after the island trip you come back to the same hotel