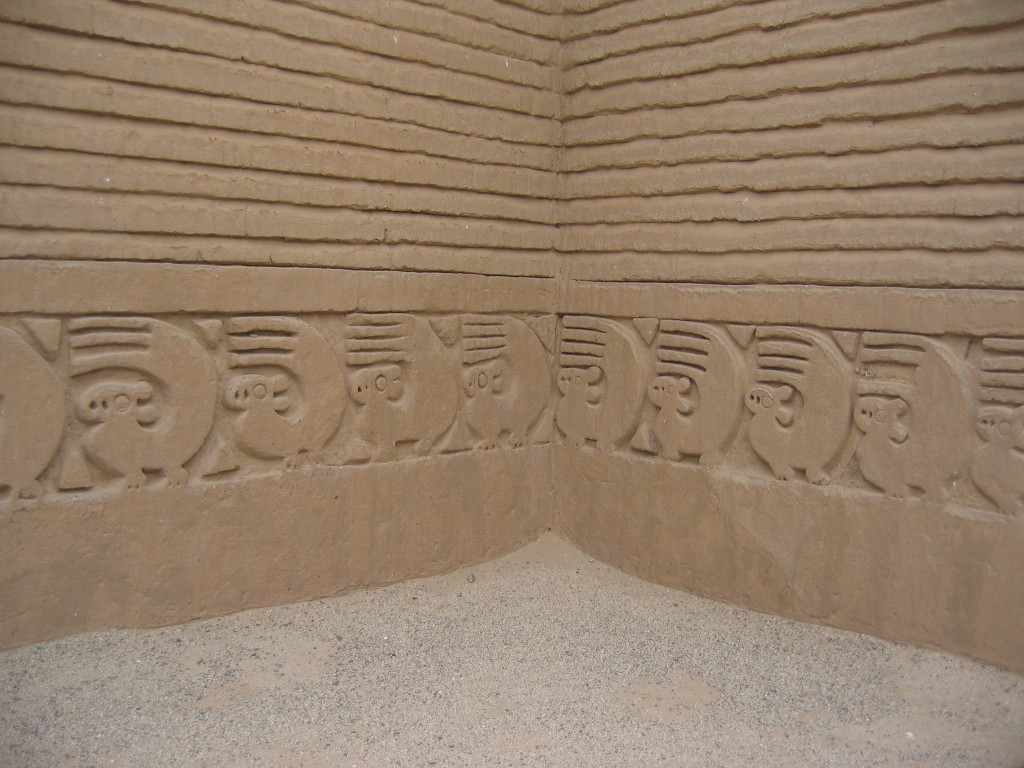 Trujillo / Its Past Awaits You!

The archaeology of Northern Peru is at least as interesting as the archaeology in the Cusco area!
Peru is a huge country, full of ancient empires, with the rise and fall of spectacular kingdoms throughout the ages. The Incas were the last era before Columbus, so their gold and empire was recorded and made famous to Europeans. Today 99% of Peru’s tourists go ONLY to the half of Peru South of Lima. Peru’s North half is about half the size of Western Europe, yet it contains the most ruins and the highest level of Americas’ past civilizations! Chan-Chanor “Sun-Sun” was the capital of the Chimú Empire. It is a huge urban complex made of a kind of mud called adobe. It is located in Trujillo (north of Peru) and was built by the 13th century. In fact, Chan-Chan is a city of mud with a surface of 1’417,715 m2. When a chief died, his city had to be closed and the next chief built a new one near to it. In Chan-Chan there were different neighborhoods for the priests, warriors, servants, and pottery and gold workers. The greatness and perfection of this city is expressed in its high decorated walls, long passages, ceremonial squares, palaces, workshops and warehouses. Nearly all the walls, some of more than 4 meters of height, are decorated with relieves of marine-life motives, for more information, see below

The beautiful Trujillo is a friendly and colonial city, which is at the same time one of the main economic and cultural centers of northern Peru. It is the capital of the marinera dance and Peruvian El Paso horse breeding. It was the center of the Chimú culture (1100-1400 AD), whose Chan Chan citadel is the largest pre-Hispanic mud-brick construction in the Americas.  Trujillo was founded in 1534 as one of the main cities in the vice-regency. The old quarter features many fine colonial buildings such as the Cathedral, the El Carmen monastery, churches and mansions which symbolize the beauty and architectural harmony of the city.

On the city’s outskirts, visitors can take in an older style of architecture, where the remains of a pre-Hispanic civilization still rear above the green fields and desert sands. The Chan Chan citadel, the El Brujo complex and the temples Arco iris and the Dragon, among others, are evidence of highly advanced northern civilizations.

In the pyramids of Huaca de sol et luna are daily new discovery’s!

Beaches near Trujillo are ideal for visitors. The most famous beaches are and Chicama The first one is only 13 km. from the city and it’s a fishermen village, the second one is farther but it’s consider a paradise for surfers, its waves  are the world’s longest , reason why it’s common to see surfers in this beach. Huanchaco is a picturesque fishing cove ,where one can find the ancient craft that appeared on Mochica pottery and on friezes at Chan Chan: the caballitos de totora, rafts woven from the totora reed in an art that has been handed down over generations. Similar skill shown by the surfing crowd, which year after year gather in the port of Malabrigo, where a surfing championship is staged every March. But above all, Trujillo is the land of the marinera. In September, the streets and houses are festooned with decorations to receive a procession of floats, competitions and parties. This is the International Spring Festival.

Trujillo has a dance step for everything, even for making love. Every summer, thousands of couples flock here to show off costumes and try out new rhythms.

Evoking sensual images with their bodies, they imitate the grace of the caballo de paso, an animal also native to the region. The women of Trujillo are said to be more reserved than those of other northern cities. The local men say the reason for the aloofness of the trujillanas, is that they have always lived within the confines of the immense city walls – since been converted into avenues – that shielding them from attacks. In the history-rich valleys of Peru’s northern coast visitors can look down on a vast sugar estate, that were once the property of a handful of landowners, known as the “sugar barons”, whose families, not so long ago, effectively owned most of Peru . You can start your tour of the city

Plaza de Armas(Plaza Mayor to some), and admire the La Libertad monument. Even from here, you can feel the ocean breeze. On Calle Pizarro on one side of the Plaza stands la Casa Urquiaga Calogne. A block further up, you come to one of the city’s most striking colonial homes, la Casa de Mayorazgo. If you venture inside, you can almost taste the history of the place. The city’s marvelous colonial churches are also an absolute must, blending Hispanic architecture with touches of native influence. The finest examples are the Cathedral, Santo Domingo, San Agustin and San Francisco.What is more, wherever you turn, you will see the magnificent balconies, huge bay-windows and massive front doors. Few cities in the region have so conserved their Colonial and Republican past. Trujillo has the cleanest streets in Peru. Indeed it looks as if some poor soul has to polish them daily. Some still retain their original cobbles.

Arriving at El Recreo square you will be immediately captivated by the romance of the place. Here under the fichus trees you catch yourself wondering how many love affairs were born – and died – here under the rustling leaves. At the corner of Orbegoso and San Martín, there is an old mansion of adobe and wood. One of the upstairs rooms was once the home to Cesar Vallejo, Some even call Trujillo “The City of Vallejo” in his honor. At night, the young often gather by the La Libertad Monument to sing Vallejo’s lyrics to rock music. Besides its fame as a cultural centre, there is also a touch of the irreverent here. Trujillo’s four universities, centers of art education, and a long-standing affinity for politics, make it the obvious choice as the regional capital. The nightlife in this “City of Spring” rivals Lima at its best. Revelers can dance the night away in discotheques set in colonial mansions, experience the excitement of a bullfight, or help themselves to a variety of local delicacies from the grill. Peru’s largest city at that time. Chan Chan, As it was called, was the capital of the Chimu civilization. There was room for 100,000 people, virtually a city-state. It was so well laid out, that when the all-powerful Incas laid siege to it, it took them several years to capture it. The city covers an area of more than 20 kilometers in diameter; its inhabitants lived an integrated existence:

The city had a religious-ceremonial centre, an enormous warehouse, administrative unit as well as a military bunker. The city also had its own reservoirs, which are still intact, as well as a beach from where intrepid fishermen would put out to sea on the traditional reed boats. Experts say the Chimu were apparently five or six centuries ahead of the western, at least as far as hydraulic engineering was concerned. Testimonies to this are the irrigation channels winding their way through the sand, like immense serpents on the outskirts of Chan Chan. A typical citadel belonging to this civilization, which lasted from 900 to 1,400 A.D., was divided into four separate segments: a great square for ceremonies; the ruler’s residence; a huge warehouse for food supplies and a reservoir; finally, there was a burial site, which was reserved exclusively for the Chimu rulers. On the outskirts of each citadel, there was an area where the people were mainly engaged in farming, craftsmanship and fishing, the main activities which sustained the civilization that occupied northern Peru in this pre-Incan era. Visitors can marvel at the architecture of the palaces: huge constructions of clay and sand measuring up to 15 meters high. The trapezoid walls of huge stones and clay measured five meters wide at their base and could withstand earthquakes. The high walls are decorated with beautiful haut-relieves, depicting customs, religious mythology, constellations as well as the farming and fishing seasons. The motifs are arranged in combinations of small figures in horizontal and vertical patterns: fishes, birds and reptiles arranged in marvelous symmetry, just like an endless embroidered hanging mural. The city, once besieged the Incas, is today under assault by local pig farmers. A rather depressing turn of events for an archaeological complex that has been declared part of the Cultural

*bank: in Trujillo money banco latino ,cheques with banco de credito
*post :at manco capac 306 open from 13 to 18 H
*internet:at the plaza de armas
*Transport: there are many combi’s route A en B between Trujillo and Huanchaco each 5 to 10 minutes *om 5h to 21 H it takes 20 minutes