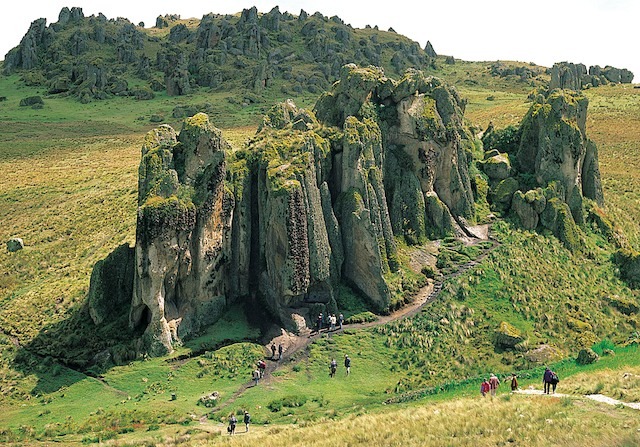 The archaeology of Northern Peru is at least as interesting as the archaeology in the Cusco area!
Peru is a huge country, full of ancient empires, with the rise and fall of spectacular kingdoms throughout the ages. The Incas were the last era before Columbus, so their gold and empire was recorded and made famous to Europeans. Today 99% of Peru’s tourists go ONLY to the half of Peru, South of Lima. Peru’s North half is about half the size of Western Europe. Yet it contains the most ruins and the highest level of Americas’ past civilizations

The city of Cajamarca is a wonderful tourist destination. Bordered by Santa Apolonia hill. It is considered the Historical and Cultural Heritage of the Americas, was transformed by the Inca Empire into an important administrative, military and religious center. On November 16, 1532, Cajamarca witnessed a key date in the history of the Americas, when a band of Spanish soldiers led by Conqueror Francisco Pizarro took Inca ruler Atahualpa captive.

The city reflects Spanish influence in its architecture, such as the Cathedral. Built in the 17th century, it has an imposing facade, decorated with striking volcanic rock inlay and an interior of finely detailed sculptures.

The churches of San Francisco.” The church was built in 1687 and is uniquely adorned by trumpeting angels the churches of La Recoleta, San Jose and La Belen – with its tastefully painted yellow, red and blue statues and beautifully carved stone frontispiece- are all well worth visiting .To the east of the city are the Baños del Inca, the natural hot springs which the Inca ruler was fond of. The district also features the Ventanillas de Otuzco, a complex of burial caves carved out in pre-Inca times. The province of San Pablo is home to two major archaeological complexes: Cumbemayo, a set of ceremonial altars and Inca aqueducts,Kuntur Wasi, a ceremonial complex of several squares and platforms held up by huge stone walls.

North of the city is Granja Porcón, a dairy farm where travelers can take part in farming chores. The farm is famous for its herd of cows which are still called by name at milking time.

Carnival time in Cajamarca is among the most famous festivals in February in Peru. The townspeople are an easy-going, amiable folk, and carnival time involves entire neighborhoods and institutions until the end of the festival, when the participants symbolically bury Ño Carnavalón, the king of the carnival. The celebrations go on for around a month, but there are eight main days, when participants are often doused with water. The Incan Baths are possibly Cajamarca’s foremost tourist attraction. The specially-built pools allow hot sulphur-bearing water to mix with cool river water evidence of famed Inca engineering. Visitors can still relax in the warm baths, where the water bubbles up through the stone bottom. The best-known thermal springs in the Baños del Inca are El Tragadero and Los Perolitos – The Drain and The Little Pots, respectively – where the water is hot enough to boil an egg. Visitors can comfortably relax in less scalding pools there at a temperature of 25 degrees Celsius (77 degrees Fahrenheit).The countryside surrounding the baths is spectacular.

A geological point of interest is a strange rocky outcrop on Santa Apolonia, whose seat-shaped appearance has earned it the name Inca’s Throne. One legend says that underground tunnels lead from this vantage point and pass beneath the city. Some even claim to hear noises from the depths of the earth, as if a battle were raging, “with sabers clashing and canons roaring,”

Much more impressive, however, is the Cumbe Mayo Aqueduct, which starts from Cumbe Bluff, 20 kilometers from the city. Built 3,600 meters above sea level, this hydraulic engineering feat continues to stun scientists, not only because the water channels are carved from rock, but also because they run in zigzag fashion at perfect right angles, apparently to reduce the speed of the water flow. They also reverse the naturally flowing current to the Pacific back toward the Atlantic until it reaches Cajamarca. Despite running downhill at a steep angle, the water bubbles along at a gentle pace. Locals claim that the petroglyphs and carvings at the site depict tunnels that run as far as Cusco.