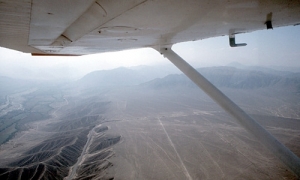 Set in a green valley amid a perimeter of mountains. The main reason to visit this small desert town are the mysterious Nasca lines. Just before arriving to the small town, you traverse a huge desert plain, similar to the Tademait, in Sahara. It’s in this arid pampas that was found in 1939 strange figures, the dark desert surface revealing a lighter colored soil beneath, drawn probably between the year 300 and 900 of our era. Unfortunately, the Pan-American road cuts this area in half. Some measuring up to 60m across, but there are also outlines of a whale, a dog, a monkey, a spider and a flower. The lines were not ‘discovered’ until spotted from above by aircraft in 1939. These huge motifs, drawn or carved in the desert of Nasca, it stretches over dozens of kilometers. All over and around they are carved in the rocks, some curious stylized animal figures (monkey, spider, hummingbird among others). These figures get over ravines or climb mountains without their shape or the rectitude of the lines being affected. These lines are similar to deep paths that reach sometimes a width of more than 3 meters. We don’t know today who draw these enormous designs and archeologists recognize there an astronomic calendar but they don’t know with certitude why it was drawn in the pampas. The Nazca priests were remarkable astronomers.We think now that these designs are copies of figures formed by the stars. This allowed having a record of the exact stars movement. These same designs appear in the sky in certain precise times, which correspond to agriculture fundamental periods like sowing, rain, and harvests. According to the stars, farmers decided their agriculture activities. All these designs have an access so that man could go inside and not put a foot on a line. The measure unit is the human forearm (32,5 cm). And 8 is for the sacred number (for example, the spider has eight legs) But the most mysterious are the gigantic rectilinear crossed traces. According to some ethnologists, including Charroux, they could be the work of extra-terrestrials. No, these lines perfectly straight, which some have 10 km of length, aren’t landing tracks for shuttles

They allow having the alignments of the sun, the moon and some stars to calculate seasons. A monkey, a fish, a spider and a hummingbird are among the many drawings and geometric figures visible only from the air

Not long time ago, Maria Reiche (1903 Germany-1998 Peru), the one who is called The Nasca Lady, left Nasca. She came here a little by accident and to Nasca in 1946, and she never left. Thanks to her we have one of the most serious interpretations. She lived the whole year in the Turistas hotel, in the town entry, all paid by the Peruvian government in homage to the research work she did in Nasca. Interesting anecdote: all the Nasca figures have four fingers. and she had four too.

The more eccentric Eric Von Daniken attributes the lines to visitors from another planet.

As many of the lines are orientated towards water sources, many people now suggest that they are likely to be processional routes designed to be walked upon as part of the ritual worship of water (a very important commodity in the desert). The best way to see the lines is from the sky. Flying over the plains in a small plane is an unforgettable experience. Flights over the lines leave regularly throughout the day on small planes which take between 3 and 5 passengers. The flight should last from 25-30 minutes.

An advice before flying over the lines: don’t eat to much… you will regret it! As the plane flies at 300 m of altitude at 220 km/h, use a fast film and a polarizing filter to take pictures in order to avoid reflections on the glass. Advised lenses: 50 and 135 mm. The weather in the region is hot and dry the whole year.

Near Nasca you can see also the Chauchilla cemetery, Nasca area is dotted with over 100 cemeteries and has perfectly preserved cloth and mummies .Chauchilla 30 km from Nasca is the most popular with good preserved mummies and tombs, after the tour you also visit the small pottery and gold mining project

The underground aqueducts are still working and worth seeing

The province of Nasca on the south coast is a severely arid region, watered only by scattered river valleys.

Historically, the aqueducts have provided a reliable source of water to the valleys, even in years when the rivers are dry and many wells fail. Conventional wisdom held that the puquios were located adjacent to spurs jutting from the foothills of the Andes, redirected meandering subterranean flows of water back into the valleys where the aqueducts captured it. These aqueducts were linked together, part of a single water system. For several decades people have theorized that some of the Lines of Nasca are linked to water resources, but they have been unable to prove it.

-Bank :Banco de credito, corner calle Lima and grau, change cash and travel cheques ,Interbank, on the plaza ,wind drown money in front of hotel Casa andina at jr Bolognesi
-Internet: At different places in the centre, the most of them have connection after 19 H
-Post office : On fermin de Castillo 37

What to see and to do

The name Nazca of Nasca comes from the quechua-word Nanay it means (Nanasca= the person who suffered), Nazca is a dessert village about 443 km on the Panamericana south from Lima and is famous for its mysterious Nazca-lines .A few kilometre from Nazca is a small museum in the house where Maria Reiche ones lived .

-Nazca lines – A must if you come to Nazca ! The flight takes about 30 min and is amazing, before flying you can watch a video – you still have to pay, Airport tax around 25 sol
-Chaucilla mummy fields: You will visit the mummy fields with an English speaking guide also, pottery, gold factory + ceramic about 37 KM from Nasca .The tour last about 2,5 h and you general do it after or before your flight.
– De Maria Reiche planetarium : in the Nasca lines hotel ,every evening at 18.45H a lecture about the Nasca lines, based on Reiche,s theories ,which cover archaeology and astronomy ,the show last 45 min ,your able to look at the moon ,planets and stars .
-Also the museum Antonini in Nasca is nice, with a good explanation about the Nasca culture 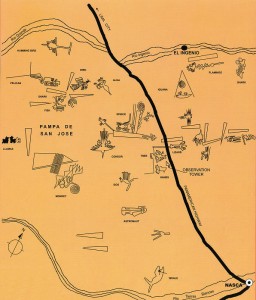