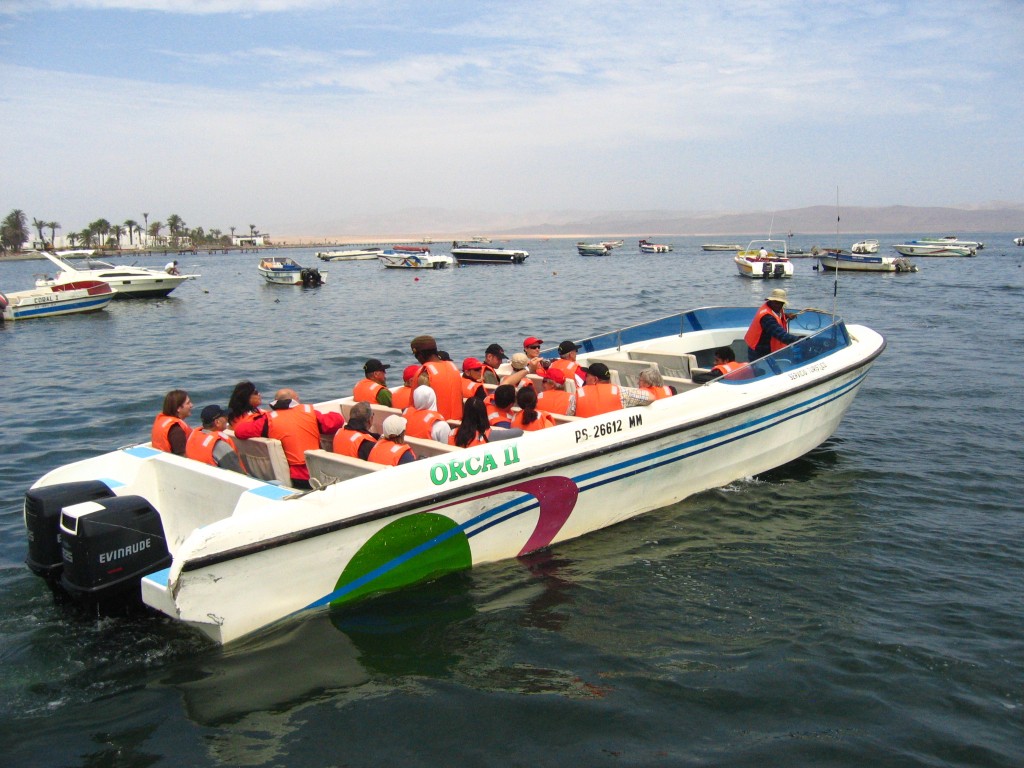 These spectacular islands, eroded into many caves and arches, provide shelter for thousands of seabirds and hundreds of sea-lions. Although the islands fall just outside the Paracas National Reserve they are protected by separate legislation. The islands are home to over 150 species of marine bird including the Humboldt penguin, cormorants, boobies and pelicans. Even condors have been known to visit. On the shores can be seen large numbers of sea-lions and in the sea it is possible to encounter dolphins and even whales.

The only way to get to the island is by taking an organized tour. Tours are with a speedboat, trips last, accompanied by a guide, for about 2 to 3 hours. Boats depart between 08:00 and 10:30 from the fishing jetty at El Chaco port by the village of Paracas. Take warm clothing a cap and sun protection, bring also your raincoat because if the currant is strong it gives you a refreshing shower.

Visitors are not allowed onto the islands but views of the wildlife from the boat are usually excellent. The tours also pass the ‘Candelabro’ a 50m candelabra-shape traced in the desert hillside overlooking the sea. Their are numerous theories about its origin (Best left to the guides to explain some of them). 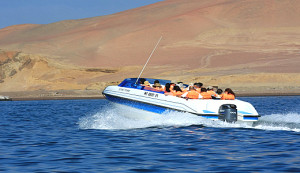 The Paracas National Reserve (340,000 hectares) was established in 1975 and is important for the protection of both bird life on the Paracas Peninsula and marine life in the sea. The Reserve is about 15km south from Pisco (famous for the white brandy named after the town). Places of interest within the Reserve include a visitors’ center (free maps available) and an archeological museum (09:00-17:00 daily). A short walk down from the museum to the edge of Paracas bayallows you to see several types of birds including flamingos.

The area within the Reserve played an important role in the Peruvian economy during the mid-nineteenth century. Vast quantities of ‘guano’ (birds’ droppings) produced by the seabirds was exported to Europe for use as fertilizer. For many decades this industry was Peru’s most important source of revenue.

Weather conditions: Mean annual temperature of 18.7°C, with a relative humidity of 82.5%. The average wind speed is 9.3mph, with occasional winds, known as “Paracas” that reach up to 20mph (the strongest along the Peruvian coast).

The Paracas National Reserve, the only protected area in Peru that includes a marine eco-system. The Paracas Reserve also has beautiful beaches, plains and cliffs for swimming and relaxation. Ica is known as an area of sand, sea, oases and valleys, the cradle of Peru’s Creole culture, saints and medicine men, where the best pisco brandy is distilled and where religious fervor is strong in the worship of the Señor de Luren or the Yauca shrine. The sandy wastes of this area gave rise to major pre-Colombian civilizations, leaving traces that have survived the ravages of time and wind erosion. Founded in 1563 the city of Ica, capital of the department of Ica, still features superb colonial constructions such as the Cathedral and centuries-old mansions. The road to Ica provides the traveler with a variety of attractions. A few kilometers South of the city of Ica lies the Huacachina Oasis, and a few kilometers ahead, the Nasca Lines, Ica celebrates three major events: the Wine Festival (Ica is home to many vineyards which produce excellent wines and pisco) and the festivals of the Señor de Luren and the Virgen del Carmen of Chincha. This is a good time to try typical Ica dishes and sweets, as well as to visit the town of Cachiche, famous for its folk healers who are said to be able to cure all kinds of ills.

Pisco Is the base to visit the islands and reserve, it’s a small village ,but last year was a big disaster in Pisco. There is not much to do in Pisco, it’s better to sleep now in Ica or Huacachina. Paracas National Reserve and the Islas Ballestas are best visited as part of an organized tour, either from Pisco (largest town nearby) You can reach Pisco along the Pan Americana highway from Lima, it’s 240km south of Lima (3hrs 30mins by bus) and 210km north of Nasca (3hrs by bus). Several buses run in both directions daily. There is plenty of accommodation in Pisco, also banks and restaurants .Ica is much bigger